Wisdom of the Elders: A dog’s lead 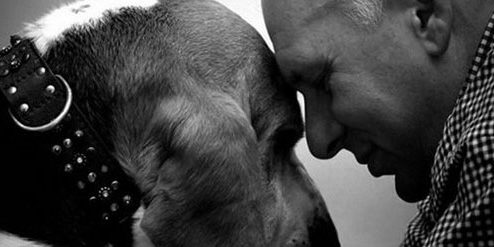 For 13 years, the garden hose has been my dog’s favourite thing. There’s a tiny squeak when I turn on the tap, a sound he can hear through multiple closed doors. He could hear it from suburbs away. His ears swivel and he comes running, insisting that intermediate doors be opened. He stands on his hind legs so he can see out the back window. “Oh, the hose,” he pants. “The hose.”

When the back door is opened, he shoots into the yard and stands in front of me as I water, sometimes barking, sometimes just looking hopeful, until I spray him with water. Then he runs around in circles, leaping and, it seems to me, laughing, until I do it again.

It’s a hassle, actually. I often put off watering the garden just to save myself and the neighbours from this noisy circus. There are plants who owe their stunted growth to my dog-induced unwillingness to water.

Now, quite recently, I can use the hose as much as I like. Over the past year my dog has become an older dog, a senior kelpie. His hearing has gone. He can no longer hear the squeak of the tap, even when he’s just there on the other side of the door.

I feel so mean, as I conduct some surreptitious watering while he sleeps, oblivious, on the other side of the door. If only he knew the delightful water sports on offer just a metre away. I feel like a married man, having a secret affair under the very nose of my innocent, sleeping wife.

The lack of hearing also makes him hard to find. I can no longer whistle him up when I come home at night. I search through the garden, checking the tucked-away spots in which he likes to sleep. Then I see the flash of his eyes in the dark as he wakes up. He bounds out of the bushes, ears up, eyes shining, ready for anything.

This is the mystery of the older dog. He can go from snoozing pensioner to eager puppy in a second. I watch him and think him a model for myself as I grow older. Make sure you get enough sleep, then let rip when there’s something worth doing.

The lack of hearing is a problem, though in other ways he has become a better dog. He has let go some of his obsessions. An example is the section of fence on our bush block. Thirteen years ago, when he was still a puppy, I threw a dead sheep carcass over that fence to stop him eating it. He spent the day staring through the fence, patrolling up and down.

It became a habit, an idé´e fixe, until every time we visited he would bound from the car to run up and down alongside that section of fence, eventually wearing down a little slot in the earth. We would call him away, of course, but he would always slink back to his task, miserable and footsore, answering to an inner compulsion, the origin of which he’d long forgotten.

Now he still tumbles from the car when we arrive and goes to do his duty. But after half an hour he stops as if to say, “Really I’ve done enough; get someone else in to do the job. I’m going easy on myself. Me? I’m retired.”

Again a life lesson: as you grow older, it may be sensible to give up the obsessions that have made you miserable, especially when you can no longer recall why they became obsessions in the first place.

His antipathies are also beginning to wane; the figures in his life who have brought anxiety or fear seem to have lost their power. He no longer freaks out when I handle the wheelie bin. For 13 years he has imagined the thing is evil and about to overpower me. For 13 years, he has barked his urgent warning: ”Beware! Beware!”

Now, finally, he appears to accept the reality: while the wheelie bin sometimes resists, I am always victorious in the weekly attempt to wrestle it down the driveway and onto the nature strip. The evidence is in: I have its measure.

My bloke’s passions, though, remain undiminished. In his case, the passion for cheese, the possibility of its appearance tracked minute by minute, by careful viewing of anyone who gets up from the couch and may be heading towards the fridge. Who knows, but they might return with cheese. As his handsome head lifts and follows their movements, I note there appears to be nothing wrong with his vision or – get this Joe Hockey – his rich sense of entitlement.

Guilty over my surreptitious watering, I feed him a fragment of cheese and tickle those once-acute ears. He has given me so many gifts and here is yet another: as we grow older let our passions be maintained, while the negative stuff fades away.

Thanks for the tip, Darcy. Later today, I’ll make sure you are in sight when the watering begins.