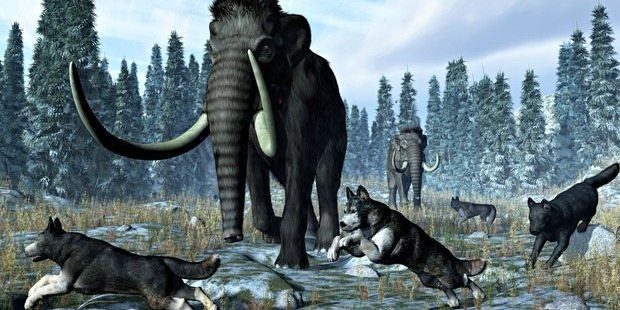 Forty thousand years ago in Europe our ancestors formed a crucial and lasting alliance that enabled us to finish off our evolutionary cousins, the Neanderthals.

Dogs are humanity’s oldest friends, renowned for their loyalty and abilities to guard, hunt and chase. But modern humans may owe even more to them than we previously realised. We may have to thank them for helping us eradicate our caveman rivals, the Neanderthals.

According to a leading US anthropologist, early dogs, bred from wolves, played a critical role in the modern human’s takeover of Europe 40,000 years ago when we vanquished the Neanderthal locals.

“At that time, modern humans, Neanderthals and wolves were all top predators and competed to kill mammoths and other huge herbivores,” says Professor Pat Shipman, of Pennsylvania State University. “But then we formed an alliance with the wolf and that would have been the end for the Neanderthal.”

If Shipman is right, she will have solved one of evolution’s most intriguing mysteries. Modern humans are known to have evolved in Africa. They began to emigrate around 70,000 years ago, reaching Europe 25,000 years later. The continent was then dominated by our evolutionary cousins, the Neanderthals, who had lived there for more than 200,000 years. However, within a few thousand years of our arrival, they disappeared.

The question is: what finished them off? Some scientists blame climate change. Most argue that modern humans – armed with superior skills and weapons – were responsible. Shipman agrees with the latter scenario, but adds a twist. We had an accomplice: the wolf.

Modern humans formed an alliance with wolves soon after we entered Europe, argues Shipman. We tamed some and the dogs we bred from them were then used to chase prey and to drive off rival carnivores, including lions and leopards, that tried to steal the meat.

“Early wolf-dogs would have tracked and harassed animals like elk and bison and would have hounded them until they tired,” said Shipman. “Then humans would have killed them with spears or bows and arrows.

“This meant the dogs did not need to approach these large cornered animals to finish them off – often the most dangerous part of a hunt – while humans didn’t have to expend energy in tracking and wearing down prey. Dogs would have done that. Then we shared the meat. It was a win-win situation.”

At that time, the European landscape was dominated by mammoths, rhinos, bison and several other large herbivores. Both Neanderthals and modern humans hunted them with spears and possibly bows and arrows. It would have been a tricky business made worse by competition from lions, leopards, hyenas, and other carnivores, including wolves.

“Even if you brought down a bison, within minutes other carnivores would have been lining up to attack you and steal your prey,” said Shipman. The answer, she argues, was the creation of the human-wolf alliance. Previously they separately hunted the same creatures, with mixed results. Once they joined forces, they dominated the food chain in prehistoric Europe – though this success came at a price for other species. First Neanderthals disappeared to be followed by lions, mammoths, hyenas and bison over the succeeding millennia. Humans and hunting dogs were, and still are, a deadly combination, says Shipman.

The idea is controversial, however, because it pushes back the origins of dog domestication so deeply into our past. Most scientists had previously argued the domestication of dogs, from tamed wolves, began with the rise of agriculture, 10,000 years ago, though other research has suggested it began earlier, around 15,000 years ago.

But Shipman places it before the last Ice Age, pointing to recent discoveries of 33,000-year-old fossil remains of dogs in Siberia and Belgium. Although they look quite like wolves, the fossils also show clear signs of domestication: snouts that are shorter, jaws that are wider and teeth that are more crowded than those of a wild wolf.

Thus we began to change the wolf’s appearance and over the millennia turned them into all the breeds of dog we have today, from corgis to great Danes. Intriguingly, they may have changed our appearances as well, says Shipman, whose book, The Invaders: How Humans and Their Dogs Drove Neanderthals to Extinction, will be published this month. Consider the whites of our eyes, she states. The wolf possesses white sclera as does Homo sapiens though, crucially, it is the only primate that has them.

“The main advantage of having white sclera is that it is very easy to work out what another person is gazing at,” added Shipman. “It provides a very useful form of non-verbal communication and would have been of immense help to early hunters. They would been able to communicate silently but very effectively.”

Thus the mutation conferring white sclera could have become increasingly common among modern humans 40,000 years ago and would have conferred an advantage on those who were hunting with dogs.

By contrast, there is no evidence of any kind that Neanderthals had any relationship with dogs and instead they appear to have continued to hunt mammoths and elks on their own, a punishing method for acquiring food. Already stressed by the arrival of modern humans in Europe, our alliance with wolves would have been the final straw for Neanderthals.

Nor does the story stop in Europe, added Shipman. “I would see this as the beginning of the humans’ long invasion of the world. We took dogs with us wherever we went after our alliance formed in the palaeolithic. We took them to America and to the Pacific Islands. They made hunting easy and helped guard our food. It has been a very powerful alliance.”

RISE AND FALL OF NEANDERTHALS

250,000 years ago The first Neanderthals appear in Europe.