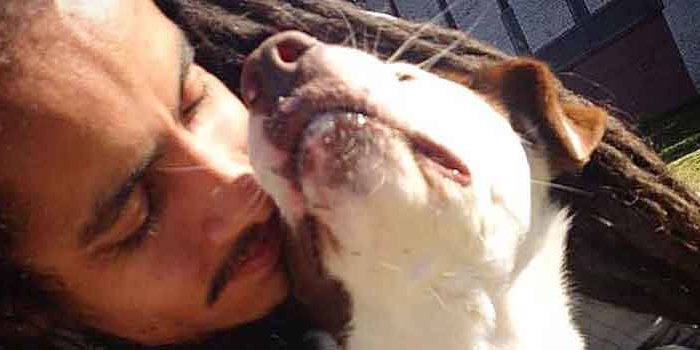 SYDNEY: Julio Precioso once told me that he likes dogs better than people, and I believe him. That’s not to say that he doesn’t like people, it’s more that he really loves dogs. We get that! And Ruby and I love him too.

He’s our go to dog walker/trainer guy when I, for whatever reason, am not able to take Ruby out for a walk or run that day. Or if I’ve taken her out in the morning but she’s likely to be by herself for a long time after that while I’m at work and no other Ruby friend is able to visit to play. He’s also the guy I call every now and again when Ruby’s weight crosses over the ‘chunky threshold’. As a labrador, with superpowers no one can resist when she points her sad brown eyes at yours, that happens from time to time. One day she looks great and then next she’s expanded.

They say when your dog is overweight you need more exercise, and that’s likely true too. But when she crosses the ‘chunky threshold’ and I can’t up my exercise it’s time for ‘what I call Ruby Booty Camp’. Ruby Booty Camp is an amped up exercise regime and reduced or low fat food program that gets Ruby’s weight back into the healthy band.

Julio is an accredited personal trainer for humans but it is with dogs that his fitness training really comes into play. He is the owner of Dogfit, a dog fitness and training business in Sydney’s Eastern Suburbs that works with many dogs, large and small, for fitness and behaviour improvements.

Julio says that for almost all of his dog clients it is their humans that he spends most of the time training. “People don’t realise how much the behaviour of the dog is a response to their behaviour. For the dog to change, they need to change first. They need to put the time and effort in. Some are open to that, others are not.”

The best advice he has for those starting out with their dogs, and of course wanting to ensure their behaviour is compatible with their social and family life, is “connect with your dog. Be consistent, persistent, clear and commanding – but never lose your cool or be cruel, ever”.

Julio’s own dog Eire, a beautiful kelpie/xx mix, is quickly becoming a star on the internet. They are regular fixtures on the Bondi boardwalk passing a soccer ball back and forth between each other and videos of them have recently gone viral across the globe with over two million views in Julio’s native Brazil alone. “The response has been phenomenal!”, he says, “She’s even been dubbed ‘The Canine Ronaldinho’! I’m very proud of her and it’s great that people are seeing our connection and how amazing she is.”

If you have a dog that could use an improved fitness regime or has some behaviour problems that need addressing get in touch with Julio for some Dogfit magic.

“Having a dog that responds to your commands without breaking their spirit is the key to a healthy and happy relationship with your dog. That’s what I’m about and why I started Dogfit. I want to help people and dogs live better lives together. Be pawsitive!”

I LOVE A DOG LAUNCH SPECIAL: Julio is helping us celebrate our I Love a Dog launch with your FIRST WALK FOR FREE! Get in touch with him and mention us.