Research Finds Hormone Bonds us and our Dogs 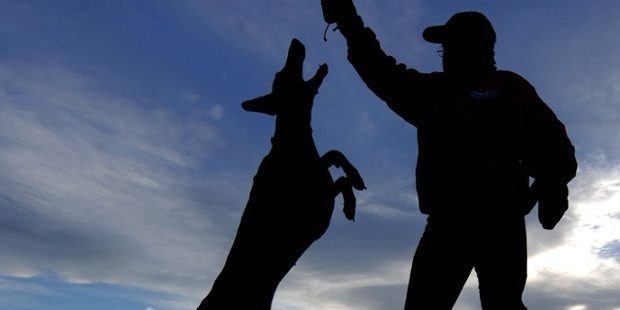 Scientists have found that dogs and owners experience surges in oxytocin, a hormone responsible for maternal caring, when they look into each other’s eyes a rush of hormone that helps people bond could explain why humans and dogs have been best friends for thousands of years, say researchers in Japan.

The scientists found that dog owners experienced a surge of oxytocin when their pets gazed into their eyes, a dramatic effect that was mirrored in the animals themselves.

The same hormone has been shown to spike in mothers’ brains when they look into their children’s eyes. The physiological response drives maternal caring and strengthens the bond between mothers and their babies.

The latest finding suggests that dogs have tapped into this ancient biological mechanism, and through it reinforced the ties that have existed between humans and dogs since the animals were first domesticated thousands of years ago.

“This might be why the human-dog relationship seems to work so well,” Takefumi Kikusui at Azabu University told the Guardian.

Domestic dogs are descended from wolves, and may have domesticated themselves. The theory is that the boldest of wolves scavenged leftovers discarded by early humans on the edges of settlements. Over generations, the wolves’ offspring became bolder still and ever closer to the people they relied on. In time, humans saw the animals as natural allies and began breeding them to be better hunters and herders.

But the relationship between humans and their dogs developed far beyond the practical. In time, the animals became companions, loved by their owners just as their owners loved their families.

To investigate how dogs and humans formed their special relationship, Kikusui’s team ran a series of experiments. They began by watching 30 owners play with their dogs for half an hour. The breeds included golden retrievers, poodles, a Jack Russell terrier, a German shepherd dog, and several miniature schnauzers. The group was an even split of males and females.

Urine tests before and after the session revealed that oxytocin levels spiked in people whose dogs stared at them the most. But their dogs experienced a similar effect, with their own oxytocin rising too. When the scientists repeated the experiment with hand-raised wolves, the effect was nowhere to be seen.

The eyes have it – pure Rubylove

They went on to perform a further experiment. This time, the researchers sprayed either salt solution or a dose of oxytocin up the dogs’ noses before watching them in a room with their owners. Dogs that had received the hormone boost stared for longer at their owners, though the effect only stood out in females. Again, tests on the owners found that the longer their dogs gazed at them, the higher their oxytocin levels rose. Why the effect was so vivid in females, but not in males, will become the focus of future research.

Kikusui said the findings point to a virtuous circle that triggers the release of oxytocin in people and their dogs and so strengthens the bonds between them. Details of the study are reported in the journal, Science.

In an accompanying article, Evan MacLean and Brian Hare at the Duke Canine Cognition Center in North Carolina, say the findings “reveal a powerful mechanism through which dogs win our hearts, and we win theirs in return.”

“If they stand up, the implications of these findings are far-reaching,” they add. As well as providing clues about how dogs became part of human history, they show how our relationships with dogs can be good for us. “The benefits of assistance dogs for individuals with autism or post-traumatic stress disorder – conditions for which oxytocin is currently being used as an experimental treatment – may arise partly through these social pathways,” they write.

Ed Note: We could have told you that!