Rules for Running With Dogs 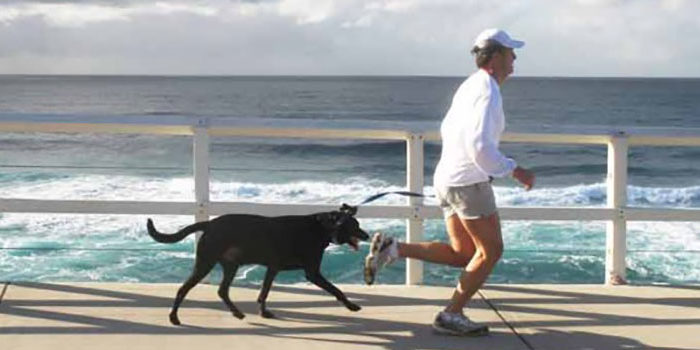 Unlike some, I don’t particularly like running. I wish I did. It’s a convenient and inexpensive form of outdoor exercise that works both your muscles and your lungs, you can do it pretty much anywhere and often, like in Bondi, with a beautiful view. Unbeknownst to my chocolate labrador Ruby, one of the reasons I got a dog was to make me run more and stay fit, so each day (well almost – in torrential downpours neither of us wants to go) Ruby and I head out on the Bondi to Bronte coastal walk to run.

Well I run (although admittedly not fast) but Ruby, keeping pace with me, more like trots. Her run is much faster than mine so to ensure she is getting the exercise she needs I take a ball along that I throw ahead of us and she runs ahead to get it.

While this works for us it does break the ‘dogs should always be on a leash’ law in our area*, so the (I think outrageous) $300+ fine for that means I am also scanning ahead for rangers and carry the lead with me just in case. To me, running with dogs on leads can be a dangerous trip hazard for me and others so if you are running (or walking) with your dog on a lead it’s important to keep your dog close to you so others can get safely past.

Dog lover and runner Pip Coates investigated some other rules for running with your dog to help you both have a good experience. Check out what she found out below. Happy running.

(* Of course I am not encouraging you to break the law :)… but as much as we can get away with it, Ruby is a free range dog… just saying… shhhhh…)

Unfortunately for both of us, she is an Australian bulldog and therefore a totally useless running partner. So after my morning run, I have to take her to the dog park for her own training, if that’s what you call rumbling with Raffi, her vizsla best friend. When on a lead, she goes on strike after 1km by simply lying on the ground and refusing to budge.

I love seeing people running with their dogs, because both seem to be in an endorphin-infused state of synchronicity. But it’s not always as easy as it looks.

There’s a lot to be mindful of before your dog can achieve running buddy status, says Rachele Lowe, a runner and vet at Sydney’s Mosman Veterinary Hospital. Here are a few pointers.

Breeds
“If you really want to pound the pavements for a long-distance run, the more athletic breeds like border collies and kelpies and poodles, greyhounds and some labradors are ideal,” Lowe says.

“Some breeds have a predisposition for hip dysplasia and other genetic defects as a result of over-breeding that can be exacerbated through extensive running.

“Border collies, dalmatians, and German shepherds excel because they thrive on one-on-one time with their owners. Running gives them a task to focus on that helps to mitigate some of their anxieties and obsessive-compulsive behaviours that often arise.

“The dogs that can’t run very far are pugs, shih tzus, bulldogs – breeds that have a compromised upper respiratory tract. We call them brachycephalic breeds. They have squashed faces and a thick area in the back of their throat where the airways are compromised.

“Overweight dogs will have trouble, and short-legged breeds aren’t going to be able to run as far.

“Every dog that has basic training from puppy classes should be able to manage going for a run with you. And every dog should have basic training. If it doesn’t understand what you’re telling it, you can’t communicate with each other.”

Age
Lowe says dogs that are fit and young generally can run as far as we can run, and anything over 5km is long distance. Once a dog gets to eight years of age, they are considered senior.

“Bigger, more athletic dogs are often also prone to getting arthritis as they get older, so they will get less athletic over time. Similarly, young dogs in their rapid growth phase under 18 months should not be overworked.”

Warning signs
“If you are going to run long distances with your dog, you need to stop after 15-20 minutes and make sure it isn’t getting worn out. Signs include excessive panting and heaving to breathe, and lagging behind. Some dogs will go and go and go. I’d recommend stopping after 5km to check in and give them a drink.”

Hydration
Don’t feed your dog before you take it on a run,” Lowe says. “Afterwards they will be thirsty but if you’ve got a breed of dog that’s prone to bloat, don’t let it gulp too much water down or give it a big meal straight away because when when it lies down its stomach can twist. Give it an hour or two after strenuous exercise before you feed it. This can affect deep-chested breeds, like great danes, and standard poodles.”

When to run
Lowe says definitely don’t run with your dog between 10am and 2pm.

“If you are running on a hot day, the heat of the ground can injure their foot pads,” she says. “Give them a break by running on the grass. Mix it up. A little bit of road running keeps their nails nice and filed down.

“When running in the dark, be aware they aren’t as good with depth perception, so you might have to give them more time going down stairs, for example.”

Recovery
Lowe says it’s much better if you run with your dog regularly because it’s the same for them as it is for us: if we do nothing for a month and then run 10km, we are going to be sore the next day.

“It’s better to do the same amount on a regular basis. And remember, start slowly and work up to it,” she says. “For dogs, the signs of soreness are less obvious than they are for us humans: they just won’t be themselves; they might not get out of bed or come for their usual pat, or they might reject a meal. They just become a little less responsive.

“Some will have an obvious lameness. As they get older if there’s some underlying arthritis and you’ve suddenly taken them on a really long walk or run, the next day or two they might be really slow and might actually limp. But most of the time its more subtle, like just sitting in bed by themselves.”

How often
Lowe says it depends on how much they are running whether they need a rest, but all dogs should be out every day in their environment either walking or running, for their wellbeing.

Gear
“A short lead for control or a halter is good for dogs that pull. I’m not a big fan of choker chains. And it’s a good idea to carry a fold-up canvas water container.”

Common sense
Lowe recommends giving people right of way and plenty of space when running with your dog. “Not everyone in the community likes dogs, and when you’ve got a dog on the move that’s going quickly you need to be sure you’re in control of it all the time.”